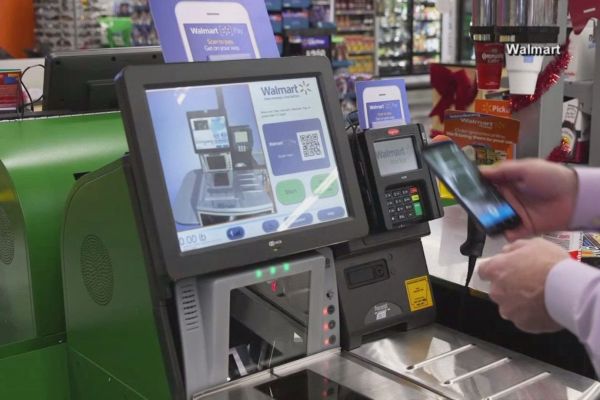 Walmart is expanding its “Scan & Go” technology to an additional 100 locations across the U.S., the retailer announced Tuesday, playing into a growing trend of companies giving consumers the option to shop their stores without interacting with a cashier.

Others working to perfect their own digital shopping scanners include grocery giant Kroger and internet behemoth Amazon, which has been piloting a store without checkout lines, called Amazon Go, near its Seattle headquarters.

Kroger’s recently introduced platform, known as “Scan, Bag, Go,” will roll out to 400 of the grocery chain’s stores later this year. That will put the company ahead of Walmart, which anticipates having its “Scan & Go” service at fewer than 200 stores by the end of 2018.

With “Scan, Bag, Go,” shoppers simply scan bar codes on items they will be purchasing, either with a handheld scanner or via Kroger’s smartphone app, as they walk throughout the store.

Self-checkout kiosks will await customers at the end of their shopping, where valid coupons have been tallied and a final total is instantly calculated. Eventually, shoppers should be able to bypass those kiosks altogether and pay directly through the app, Kroger has told Business Insider.

The process at Walmart looks similar: Using an app, customers will scan items (even produce) on their own as they walk through the store. They will be able to pay on their phones when they’re finished. A Mobile Express lane will also be situated at the front of Walmart’s stores for those shoppers to walk through, for security purposes, before they leave.

The impetus behind these efforts is the idea that many consumers today want a speedy, seamless experience, especially when shopping for grocery items.

While some shoppers are getting comfortable with ordering groceries online, a majority of Americans are still reluctant to do so. Although grocery stores are still vital to many communities, those locations often lack technology upgrades. 2018 could be a year to change that — or at least start.

Grocers are under pressure, in an already thin-margin business, to cut costs and make the shopping experience more enjoyable for customers. The front of those stores merits a refresh, where long lines can be slashed and resources can be employed elsewhere.

As the cashier ranks dwindle, displaced employees can work other areas of the store, focusing on certain merchandise categories or assisting customers.

For now, Amazon Go is still only open to the company’s employees in Seattle. But Kroger and Walmart are opening the floodgates for this new technology at hundreds of stores in 2018.