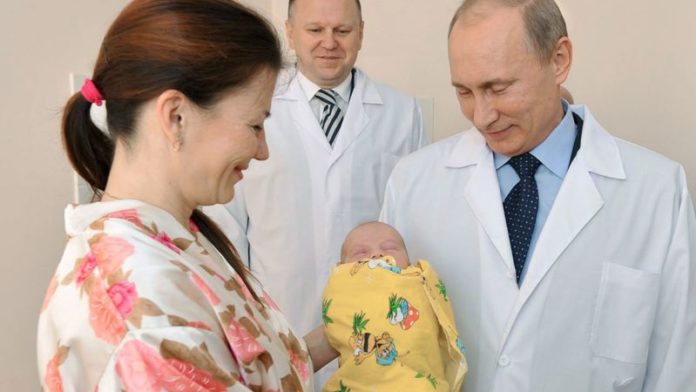 Vladimir Putin has loosened Russia’s purse strings to expand a popular subsidy for families ahead of a presidential election in which he’s widely expected to seek a fourth term.

The government will spend 500 billion rubles ($8.6 billion) over three years on measures to encourage Russians to have more babies, including mortgage subsidies and payments to new and growing families, Deputy Prime Minister Olga Golodets told reporters Wednesday in Moscow. The money will come from government reserves and won’t require changes in the budget, Finance Minister Anton Siluanov told the upper house of parliament.

The welfare program’s being rolled out a day after Putin told officials at a Kremlin meeting that Russia must do more to support new parents and create “additional incentives for the birth of the second and third child” in families to counter a looming demographic crisis.

Putin’s sweetener to young Russians comes after the government has failed to raise pensions and other state benefits in line with inflation in recent years as spending has been cut amid the fall in oil prices and the longest recession this century. While he’s yet to declare his candidacy, Putin’s all but certain to seek re-election for another six years in March. The pitch to parents also seeks to counter a long-term demographic decline that may reduce Russia’s working-age population by 600,000 annually over the next six years.

Russia suffered a decline in birth rates amid the chaos of the 1990s after the collapse of the Soviet Union. That’s feeding into a second slump now as the generation born then reaches its prime child-bearing years. Russia had 12.9 births per 1,000 people last year, the lowest since 2011, according to the Federal Statistics Service, which calculates the rate may plunge by a further quarter to just 9 births by 2035 in the most pessimistic circumstances.

“We must adopt a package of measures that will allow us to stabilize population numbers and prevent them from declining in the next decade,” Putin told the national children’s strategy meeting. “We must reset our demographic policy.”

From January, the government will introduce a monthly allowance for poorer families on the birth of a first child, which would continue for 18 months, Putin said. Over three years, the program will cost 144 billion rubles, he said.

A popular policy due to expire next year that provides 453,000 rubles in one-time payments to mothers who have a second baby and subsequent children should be extended until the end of 2021, Putin said.

Families that have a second or third child after January will also be eligible for a special mortgage program in which the government subsidizes annual interest rates above six percent, he said. As many as 500,000 families may benefit over the next five years, Putin said.

Putin announced the new measures in a rambling speech that at one point touched on Friedrich Engels’ views on monogamy and the virtues of the tapeworm, which the president said is able to reproduce by itself because it has both male and female attributes.